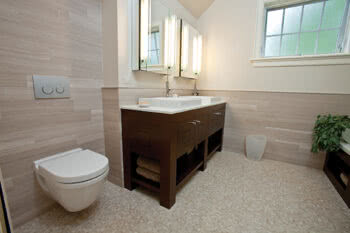 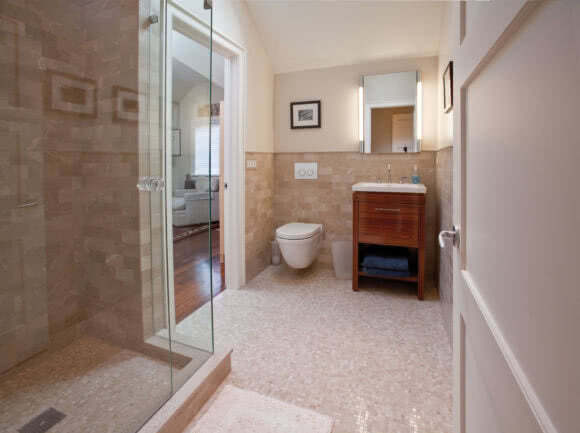 “From the outside, it remains as much a part of the Lake Bluff community as it was when we purchased the home,” says Knezevic. “But from the inside, that is where we broke from what one expects within a Cape Cod. The Geberit wall-hung toilets we saw displayed at K/BIS a few years ago helped us accomplish that for our bathrooms, turning them into rooms of elegance and practicality.”

The renovation occurred over a period of years – on and off. “Saving the gable into the house…the original brick limestone details… preserving the backyard. For example, to hold the home’s value, a one-car attached garage cannot be turned into a two-car garage,” Collins continues. “My idea to lower the floor and install a vertical lift solved that problem. Ultimately, an integrated design was achieved.”

“The zoning code is restrictive, and we wanted to avoid going in front of the board with unusual variation requests. And while the exterior maintains the traditional charm of the Lake Bluff community, the inside reflects us: modern. That’s why the Geberit technology fit so perfectly,” she says.

During their travels to Europe, the couple had seen many Geberit systems in use but, until K/BIS (The Kitchen & Bath Industry Show), did not realize they were being used in the United States. Knezevic says that seeing how the technology functions gave him enough confidence to specify them for all four bathrooms in their Lake Bluff home.

“The bedroom renovations worked, but with the smaller bathrooms, the Geberit alternative offered just the space savings we wanted,” Knezevic says. “Efficient: yes. Elegant: without question. The Geberit product transforms the bathrooms into the modern, minimalist look we wanted.”

The Geberit Concealed Tank and Carrier System gives a bathroom an entirely new dimension by mounting the toilet on the wall instead of the floor, while concealing the tank and other functional components.

Wall-hung systems from Geberit are an alternative to floor-standing toilets and complement all design styles. Once the system is installed, the only visible element is the stylish flush panel, which offers complete access to components that may need future maintenance.

“We wanted to show the town how you can do a high-end home to fit within the character of the town,” says Collins. Every solution under consideration seemed to have a compromise, and the couple did not care to compromise. “What’s interesting about the whole process is that when we finished, we realized all the limitations were simply an impetus to come up with a non-typical solution. They became the most interesting ones, and that was the Geberit wall-hung toilet.”

Knezevic notes: “The layout looks so obvious and simple, but it took a long time to get to that point.” According to Knezevic, the plumbing contractor was not familiar with the Geberit system, a situation that Geberit is resolving by conducting numerous contractor training programs throughout the United States.

Knezevic decided to install the toilets himself. “I’m glad I did it, because it was a great learning experience,” he says.

“Our bathroom designs were more zen-like, and the wall-hung concept is used by commercial architects all the time,” Collins points out. “The maintenance is superior: as the tank doesn’t sweat, it made so much sense.”

“The fact is, it took no more time than a regular toilet,” says Knezevic. “It’s slightly extra labor for the carrier that holds the fixture, but not to the extent one would expect.”

The toilets used by the architects with the Geberit Concealed Tank and Carrier Systems were designed by Philippe Starck, one of the giants of contemporary design. The manufacturer of the toilets was Duravit and the fixtures carried Starck’s name: the Starck 1 and the Starck 3.

In addition to offering compatibility with a wide variety of ceramic fixtures such as the Starck 1 and Starck 3, Geberit also offers the widest selection of flush plate styles and finishes on the market, making it easier to customize the installation to match the room’s overall design.

Lake Bluff may not be Vermont, but it offers as pretty an autumn as you can find around the Chicago area. The now-renovated home of Mary Collins and Aki Knezevic continues to maintain its heritage, while showcasing some of the most stunning architectural details and choices available in residential homes. ←

About Geberit
Geberit North America is part of the Geberit Group, a European market leader and global provider of sanitary technology. Located in Des Plaines, Illinois, Geberit North America provides concealed tank and carrier systems for wall-hung and floor-mounted toilets and fixtures. Geberit systems improve the look of any bathroom by hiding the unsightly toilet tank. Replacing a standard tank and toilet with the Geberit system results in more usable space, improved hygiene and better accessibility. The unique dual-flush valve saves water and is practically maintenance free. Geberit also offers cable-controlled bath waste and overflows in a variety of designer finishes. Critical working parts are outside the waterway, ensuring years of trouble-free operation.

For more information, contact your Geberit sales representative, call 800/566-2100 or go to → geberit.us