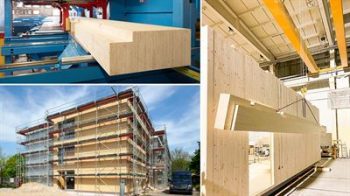 With a total of 32 schools slated to be built by 2025, the City of Berlin, Germany, found sustainable wooden modular construction offered the short construction time it desired while simultaneously establishing the city as one of the world’s major metropolises for wood construction. Six schools have already been successfully completed. The modular structures were built with 8-meter long GLVL beams made of Kerto® LVL S-beams by Metsä Wood. 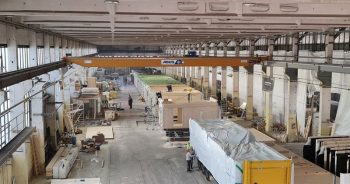 One school consists of nearly 100 modules, each 3-meters wide and 8-meters long. All modules were prefabricated offsite and assembled on the construction site. To achieve a column-free floor plan for classrooms, 8-meter long beams had to be used at the joint of the modules.

“For structural reasons, glulam was not suitable for this project. Steel beams were also not a solution for us or the architects,” says Hagspiel. The structural designers finally decided to use beams made of the high-performance and easy-to-process GLVL (glued laminated veneer lumber).

The GLVL was manufactured by Holzwerke Bullinger using Metsä Wood’s Kerto LVL. Ingo Faller from Bullinger’s sales department describes the process as efficient: “We have updated our standard glulam process so that we can use LVL beams. The GLVL beams have a high bending strength. In the GLVL process, laminated veneer lumber (LVL) beams are glued together. Compared to glulam, LVL is uniform in quality and therefore has an extremely high static load-bearing capacity. As a result, GLVL beams have a much higher flexural strength. Interestingly, LVL is stronger in strength-to-weight ratio than steel.”

About Metsä Wood
Metsä Wood is one of Europe’s leading manufacturers of engineered wood products. We process valuable log wood into environmentally friendly products for the construction and transport industries, which are both megatrend-driven businesses of the future. Our main products are Kerto® LVL, birch and spruce plywood and further processed sawn timber. Material-efficient wood products store carbon and play an important role in combatting climate change. Metsä Wood’s sales in 2021 were EUR 0.6 billion. The company currently employs approximately 1,700 employees. Metsä Wood is part of Metsä Group.