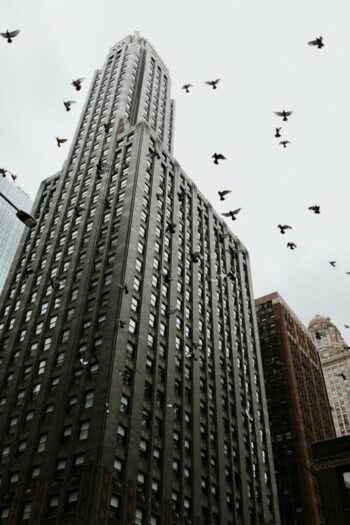 Buildings in New York are For the Birds

“Bird-friendly building design should not be seen as an add-on or an extra,” said Dr. Christine Sheppard, Glass Collisions Program Director for American Bird Conservancy. “Many strategies for controlling heat, light, and even security can be bird-friendly strategies, too. These can be incorporated into almost any building style, but should be built into project design from the outset to minimize additional costs. That’s why this kind of legislation is so important.”

“This bill is a compromise forged by our diverse consortium, which wrestled with and reconciled competing interests of many sorts — design, light, height, use, location, cost, bird mortality…. It’s a huge leap forward for long-term conservation,” said Kathryn Heintz, NYC Audubon Executive Director. “It will reduce collisions and save migratory birds whose numbers are declining dramatically. As a whole community, we must do better for the future, better for the sustainability of urban living, and better for the health of both birds and people.”

“It’s our ethical responsibility as members of the building industry to address the role of glass in bird population decline,” said Dan Piselli, AIA, LEED AP, CPHD, Director of Sustainability at FXCollaborative. “This informed our strategy for renovating the Jacob K. Javits Convention Center in 2013.” Once identified by NYC Audubon as the city’s top bird-killing building, it was renovated with the goal of not only making the facility more transparent and welcoming, but also making it bird-friendly. New glass incorporated patterns that birds perceive as an obstacle and that also reduce cooling costs. Bird deaths have dropped by 90 percent and the building now uses less energy since the renovations were completed.

“The materials and techniques that prevent bird collisions are already commonly used for a variety of reasons in our buildings; this legislation mandates their use in ways that also protect birds in cost effective ways,” said Benjamin Prosky, Assoc. AIA, Executive Director of AIANY and the Center for Architecture. “AIANY and its members are proud to have fought for this commonsense bill.”

A recent study published in Science reported that the U.S. and Canadian breeding bird population dropped by more than one-quarter since 1970. Glass collisions are one major cause of this loss, killing up to 1 billion birds in the U.S. each year. According to NYC Audubon project Safe Flight, 90,000 to 230,000 birds die each year during their migrations through New York City alone. Fortunately, both home and commercial windows can easily be made safe for birds. Get resources and ideas for solutions here.

American Bird Conservancy is a nonprofit organization dedicated to conserving birds and their habitats throughout the Americas. With an emphasis on achieving results and working in partnership, we take on the greatest problems facing birds today, innovating and building on rapid advancements in science to halt extinctions, protect habitats, eliminate threats, and build capacity for bird conservation. Find us on abcbirds.org, Facebook, Instagram, and Twitter (@ABCbirds).

AIA New York is the oldest and largest chapter of the American Institute of Architects with more than 5,500 architect, allied professional, student, and public members. AIANY is dedicated to three goals: design excellence, public outreach and professional development www.aiany.org.

NYC Audubon champions nature in the city’s five boroughs through a combination of engaging programs and innovative conservation campaigns. NYC Audubon is an independent nonprofit organization affiliated with the National Audubon Society. Through its efforts, NYC Audubon protects over 350 species of birds living in or passing through the 30,000 acres of wetlands, forests, and grasslands of New York City www.nycaudubon.org.

On July 1, 2020, the U.S. House of Representatives for passing H.R 2, which includes H.R. 919 – Bird-Safe Buildings Act, today. This bipartisan bill is designed to reduce bird mortality by calling for federal buildings to incorporate bird-safe building materials and design features. As many as 1 billion birds a year die in collisions with buildings in the United States alone.

Congressman Mike Quigley has been the driving force behind this bipartisan legislation for more than a decade. “In a time when wildlife faces unprecedented, human-driven challenges, we have an obligation to be responsible members of our environment and do what we can to mitigate our impacts on those we share this planet with,” said Congressman Quigley. “That can start with protecting wildlife from deadly collisions with our buildings.”

The Bird-Safe Buildings Act will soon be introduced in the Senate, and conservationists are optimistic about its passage. Many bird-friendly design techniques — such as installing screens or grilles on windows and minimizing the use of glass on lower floors — are already used in some federal buildings to control heat and light, or for security. The proposed bill would require the General Services Administration to apply similar measures, where practicable, to all new and existing federal buildings.