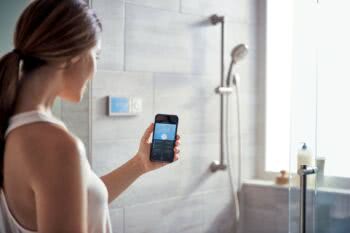 North Olmsted, Ohio — From setting the thermostat from across the room to creating a grocery list while doing the dishes, consumers continue to capitalize on the convenience offered by digital voice assistants. Moen, the #1 faucet brand in North America, is expanding the capabilities of its first-to-market U by Moen™ shower to provide even more innovative ways to interact with water, now offering enhanced functionality with Amazon Alexa, and compatibility with Apple HomeKit™ and the Google Assistant – as well as a new Matte Black controller finish for additional design customization.

U by Moen is a next-generation Wi-Fi/cloud-based digital shower which offers mobile connectivity and unmatched personalization, providing homeowners countless ways to create their ideal showering experience, with three choices to control the shower: voice activation, smartphone app and an in-shower controller.

“At Moen, we’re committed to developing smart innovations that enhance people’s everyday experiences with water, and that innovation doesn’t stop once we’ve launched a product,” says Michael Poloha, group manager, IoT, Moen. “With the increasing popularity of digital voice assistants, we wanted to make sure consumers have several options available regardless of the smart home ecosystem they choose, as well as streamline the commands to make controlling your shower as simple as possible.”

To activate U by Moen shower, users can ask their voice assistant to remotely start and stop the shower with the sound of their voice. Once they have created personalized presets in the U by Moen app, homeowners simply state the name of the preset within the command.

Users will know the commands have worked as the device will reply indicating the desired activity has been completed, the app on their smartphone and the controller in the shower will respond by lighting up, changing color and reacting to the specific command.

How U by Moen Works: 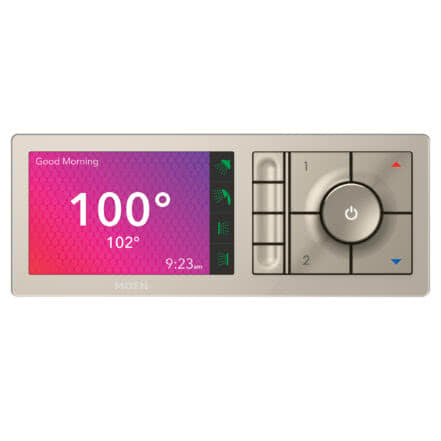 The color of the screen evolves, indicating the system is warming up or cooling down to reach the desired water temperature.

The U by Moen shower includes a digital valve that offers precise, thermostatic temperature control, and enables the user to connect up to four shower devices (showerheads, handshowers, body sprays, etc.). The Wi-Fi-connected digital shower controller features a five-inch, non-touch, LCD screen that provides feedback on the shower status through on-screen messaging and notifications.

For users’ safety, the shower valve will allow temperatures between 60 and 120 degrees. As they change the water temperature, the color of the screen will evolve from light blue, dark blue, purple, orange and red indicating the system is warming up or cooling down to reach the desired water temperature. When the shower is ready, the screen will turn white and provide an on-screen notification and signal with a tone. The controller itself has seven to nine buttons – depending on whether it’s a two- or four-outlet system – enabling users to accurately control their shower experience.

The controller’s design not only is stylish, but it also provides users with the best of connected features and functionality. They can customize settings directly in the shower and save them with one of two preset buttons. Depending on their style preference, homeowners can choose a Terra Beige controller finish, or new Matte Black. The new Matte Black finish integrates seamlessly with Moen’s expanding portfolio of Matte Black bath products, creating a clean, sleek, modern look fitting for a high-tech home.

The U by Moen smartphone app gives users the ability to create up to 12 personalized presets, including name, greeting, outlets, temperature, shower timer and notifications. It also allows users to have the shower pause at initial start-up once it reaches the desired temperature. Not only can users create their personalized shower experience from within the app, but they also can fully control the shower from their smartphones. They can turn on the shower, change temperature and turn outlets on and off with the push of a button. The app also allows users to customize system-wide settings, such as the outlet icons, which Wi-Fi network the system is connected to, language and time zone. Security is an important aspect of any connected device, and Moen has thoughtfully designed each U by Moen shower product to have a unique encrypted key to ensure the connection is always secure. The smartphone app is available as a free download from both the Apple App Store and the Google Play Store.

“At Moen, we not only listen to the wants and needs of consumers, but to those individuals who will be installing our products. To make installation easier, U by Moen shower offers a 30-foot data cable between the digital valve and controller so it can be put wherever is most convenient for the plumber and homeowner,” Poloha adds. To give users peace of mind, the digital valve also has an optional battery backup kit available. If the power happens to go out while someone is in the shower, the system will not shut off.

U by Moen shower features Moen’s best-in-class warranty* to ensure superior quality. For more information about the U by Moen shower, visit moen.com or call 1-800-BUY-MOEN (1-800-289-6636)