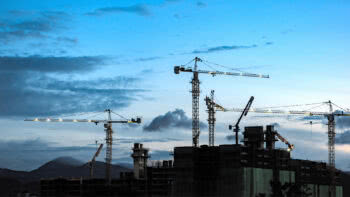 “UK construction output continued its recovery in July, with output increasing by 17.6% month-on-month, significantly higher than the market consensus forecast of 10.5%. The strong monthly data is in line with GlobalData’s expectation of a steady recovery and reflects the general improvement in economic conditions across all sectors. GlobalData forecasts that construction output in the UK will contract by 10.3% in 2020.

“Construction output growth is expected to continue to grow and partially recover over the next few months. However, the construction sector is likely to be constrained by two factors in the medium term; firstly, a possible second virus outbreak in the winter, which may lead to another lockdown and will cause significant disruption to the recovery of the sector. A second potential constraint for the sector is if the UK fails to reach a trade agreement with the EU before December. Tariffs are likely to be applied on products and goods imported by the sector for construction use in the event of a failure to reach an agreement. This will likely become a significant cost for firms already struggling with cash flow difficulties as a result of the virus outbreak.

EU construction activity picks up sharply in May, but…

According to Ali, GlobalData forecasts construction output will contract by 8.1% in Western Europe in 2020. There will be a steep contraction in Q2 2020 being partially offset by improvements during the second half of the year.

“However, there are downside risks to the prospect of a solid recovery in the second half,” he cautions. “If a second outbreak occurs that results in renewed lockdown measures, bets are off.”

Despite the improvements in May, construction output is still markedly down compared to pre-COVID-19 levels – in May, output was down by 10.3% year-on-year.

“The rebound in output reflects improvements in both civil engineering, which rose by 22.4% in May on a month-on-month basis, and in building construction, up 20.4%. The highest increases in output were recorded in Italy where output increased by 168%, and in France, up by 118.3%,” he points out.

The construction output for Northeast Asia, which is the largest region in terms of the total value of global construction output, has been revised down to 1.1% as compared to the pre-COVID forecast of 4.2% by GlobalData, a leading data and analytics company.

Although being the epicenter of the COVID-19 pandemic, China is still expected to post a minimal level of growth in 2020, as it has shown signs of recovery in recent months after the sharp downturn in the first few months of the year, supported by investment in infrastructure.

Investment activities started picking up in March, before accelerating in April, with the latest data showing further progress in investments in both fixed assets and real estate segments. Investments in real estate development grew by 7% year-on-year in April, which followed marginal growth of 1.1% in March and a 16.3% contraction during the first two months.

The quarterly construction value add data from the region presents a mixed picture with real growth rate declining by an unprecedented 17.5% in China and by 9% in Hong Kong; however, the South Korean industry grew by 3.2%, while in Mongolia the growth rate was 11.9%.

Dhananjay Sharma, Construction Analyst at GlobalData, comments: “Trade disruption is likely to present a major challenge to the export oriented economies of Taiwan, South Korea, Hong Kong and to a lesser extent on Japan and China as companies cut back on expansion due to cash flow problems, thereby affecting industrial construction sector badly.”

Construction activities in Japan have been affected as major construction contractors temporarily halted work in the country due to the state of emergency measures announced by the government. In South Korea, where the government’s extensive tracing and testing method has limited the spread of the virus, though the industry performed better than expected, the total value of construction orders received declined by 11.8% during the first four months.

Hong Kong’s construction industry was already in dire straits prior to the COVID-19 outbreak, with output contracting by 9.3% in 2019. The situation worsened following the COVID-19 outbreak and the renewed tensions following political interference from China. The US government’s trade war with China and the removal of Hong Kong’s special status are expected to decrease investment in industrial construction, while the commercial segment would be affected due to decrease in tourist inflows.

Mr Sharma concludes: “Led by the recovery in China and the better than expected growth in South Korea, the industry is expected to grow by 5.7% in 2021 and an annual average growth rate of 4.2% over 2021-2024. This will be due a slowdown in the growth in China as the industry is becoming more mature and the government focuses more on new age infrastructure including 5G networks and data centers.”

Prior to the COVID-19 outbreak, the construction industry in Spain was already showing signs of slow down, with growth decelerating to 3.5% in 2019 after an annual average growth of 5% during the preceding four years. However, owing to the effects of COVID-19, the industry is now expected to contract by 10.4% in 2020, according to GlobalData, a leading data and analytics company.

Before the outbreak, GlobalData had predicted 1.6% growth for Spain’s construction industry. However, as the virus has intensified and Spain has been among the most affected countries in Europe, the forecast has been revised downwards to a contraction of 10.4%.

Danny Richards, Lead Economist at GlobalData, comments: “Construction projects have been severely affected due to the COVID-19 crisis. The contraction in the second quarter would likely be worse than the 9.1% contraction recorded in the first quarter owing to the lockdown and containment measures. In addition, the weaker economic activity will put pressure on the commercial, industrial and residential sectors.”

The tourism sector is the backbone of the Spanish economy, as it contributes around 6% of the country’s GDP. Travel restrictions imposed by the government have huge ramifications for all segments of the tourism sector. Due to the weak environment, projects in the leisure and hospitality buildings sector are likely to be halted due to a lack of financing.

Richards concludes: “The infrastructure sector is expected to face disruption in the coming months. The government had plans to upgrade the country’s road infrastructure with the Ministry of Development announcing a EUR5bn (US$5.7bn) program to improve roads in Spain. It is expected that once the virus outbreak subsides, works will once again restart and further investment in infrastructure projects will be forthcoming to kick-start the economic recovery. However, there are concerns that the government will face a sharp deterioration in its fiscal position, undermining its capacity to accelerate infrastructure investment.”

About GlobalData
4,000 of the world’s largest companies, including over 70% of FTSE 100 and 60% of Fortune 100 companies, make more timely and better business decisions thanks to GlobalData’s unique data, expert analysis, and innovative solutions, all in one platform. GlobalData’s mission is to help our clients decode the future to be more successful and innovative across a range of industries, including the healthcare, consumer, retail, technology, energy, financial and professional services sectors.

We provided the links to these companies that were inolved in the M&A and encourage you to follow them. They open our eyes to global business, and what companies in other countries focus on. Three were from Germany of these top five, one in the U.S. and one British deal. In other words, business never stops, and an excellent article about that is B2B Never Sleeps. This article tracks what happened on one weekend on a publisher’s website that was able to “see” the companies that were coming to the website for information, and what information they came for. Very interesting since “information never sleeps.”