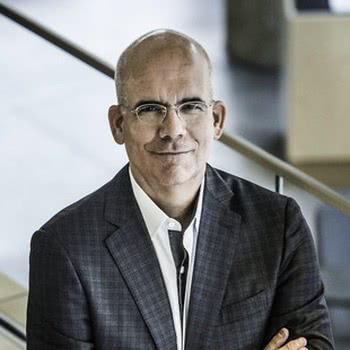 Rick Archer, Overland’s CEO, put it this way: “Excitement is an understatement as we make this announcement. It’s a collaboration best described as a creative fusion of talent that will seamlessly meld together to produce iconic and transformative projects.”

Speculation was everywhere about Trubey’s next step since his June departure from HKS, where he worked for 29 years (most recently, the firm’s Global Director of Venues and executive vice president).

“As you can imagine, I’ve had a lot of queries since the HKS departure,” said Trubey. “I am absolutely positive that my best work is in front of me. There was one over-riding goal. I want to work with an established and proven firm that had a team of professionals who are grounded in a set of core values. Those ideals include respect, trust and a commitment to generate ‘original thought’ in everything we create,” Trubey emphasized.

Trubey said he gave no consideration to establishing a firm with his name on the door.

“People like me thrive when they are part of a dynamic, energetic team with a history of results. In short, that’s Overland Partners,” he said.

Those guessing about Trubey’s next move likely did not know about his longtime relationship with several members of Overland Partners’ senior leadership team. In fact, Robert “Bob” Shemwell, who is a senior principal at Overland, was Trubey’s friend and roommate at Texas A&M University, and they have maintained a friendship for decades.

Overland is based in San Antonio, and the firm has a commanding body of work in Texas as well as across the United States and abroad. As Overland grew, Shemwell introduced Trubey to his business partners, one of whom is Rick Archer, Overland’s CEO.

Archer added he expects clients will recognize the strength in the firm’s combined and diverse portfolios.

Trubey brings longtime colleagues whom he calls “some of the finest creatives in the industry” to the new office including: John Hutchings, Austin Ash, Trip Boswell, Dan Trafford, Katie Miles and Cheryl Karalla. Already, they are at work in temporary office space that overlooks Klyde Warren Park.

These professionals and many others were the driving force behind inspiring and innovative entertainment venues across the world. Their portfolio includes AT&T Stadium, home of the Dallas Cowboys; SoFi Stadium, the 3.1 million square foot venue that is home to the Los Angeles Rams and the Los Angeles Chargers; U.S. Bank Stadium, the Minneapolis home field for the NFL’s Vikings as well as Lucas Oil Stadium, built for the NFL’s Indianapolis Colts. For Major League Baseball’s Texas Rangers, Trubey’s team designed the new Globe Life Field in Arlington, Texas, notable for being the baseball team’s first stadium with a retractable roof; and they designed American Family Field for the Milwaukee Brewers.

This impressive body of work is added to Overland’s, which has received more than 200 design awards and been featured in national and international publications and media. A Texas Society of Architects Firm of the Year, Overland has been recognized by Architect Magazine as one of the top 50 design firms and one of the top 50 sustainable design firms in the United States. (A summary of key projects can be found at www.overlandpartners.com)

“This is a defining moment for all of us,” said Archer. “We’re collectively focused on the future, and more good news is coming soon.”

About Overland: In every project there’s something beyond what’s immediately apparent, a deeply inspirational outcome. They call this The Embedded PotentialTM. The company begins this dialogue knowing the destiny of each project is unique. They remove assumptions and limitations, and take away defaults, refusing to play small or listen for outcomes they’ve heard before. Overland brings  a set of values and design philosophy that shapes their work and relationships.