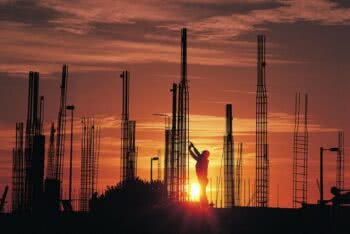 CMD Webinar Summary: How Sustainable is the Construction Economic Recovery?

Have you been concerned with growth and trends in the construction industry since the recession, and are you eager to hear the forecast for 2016 and beyond? Here is our summary of the Economic Outlook Webcast, Construction 2016: How Sustainable is the Economic Recovery? Presented by chief economists who know the construction industry, Kermit Baker of the AIA, Ken Simonson of the AGC and Alex Carrick of CMD/iSqFt on November 19th, 2015.
If you were unable to attend this event, here is a summary prepared by Interline for your review.

The webinar Construction 2016: How Sustainable is the Economic Recovery? began with an introduction and discussion of the current climate in the construction industry. Like so many other industries during the recession, construction suffered a major hit. Many business owners are wondering if progress has been made and what the economic forecasts for the industry look like as we move into 2016 and beyond.

The main speakers during the webinar were three economists who are members of the AIA, ACG and CMD. Kermit Baker, Ken Simonson and Alex Carrick each provided their own analysis of the state of the industry since the recession. They agreed on some points and offered unique, differing perspectives on others.

Kermit Baker, Chief Economist, AIA
Baker’s discussion focused on both trends in the industry prior to the recession in 2008, and longer-term trends over the past three decades. Baker reported that recovery since the recession has “been slow,” but that there has been a recent build in momentum and that the industry is in the “early stages” of recovery with the unemployment rate falling “dramatically.” There is, however, still a shortage in skilled labor: since the recession, the construction industry has lost over two million workers.

Baker reports other major shifts in the industry, including the recent trend towards an older, more diverse workforce. More workers are age 55 or older than in 1990 or 2000, and there has been an increase in the percentage of immigrants represented in the industry. Long-term growth in employment might be slowed by the lower availability and demand for vocational training, technical training, and apprenticeships, all of which have declined since the 1990s.
Baker believes that the industry will be able to rely on several sectors that promise steady growth: “green” sustainable construction projects and office and retail construction.

Ken Simonson – Economist, ACG
Similarly to Baker, Simonson agreed that the industry is improving, but it is still not as strong as it was before the “peak” in 2006-2007. Employment is still 7% below that high point, and while construction spending is up, job gains “have shrunk.” There is also a pronounced shortage of skilled, experienced workers, and often construction companies have to “fight” for experienced workers or rely on subcontractors to complete their projects.

One major trend that Simonson noted was the shift to multi-family construction over single-family housing. More people (particularly Millennials) are moving to urban areas and opting for apartments or condos over purchasing single-family homes. Because of this shift to the city, construction of traditional K-12 schools may also slow down as new parents turn to charter schools and alternative educational options.

Construction in the commercial sector (particularly the power sector) has risen. Simonson pointed out that there has been a “beneficial decrease” in the prices of products and materials, particularly copper, aluminum and diesel fuels. Concrete prices have risen slightly since the recession.

Alex Carrick, Chief Economist, CMD
In contrast to Baker’s and Simonson’s reports, Carrick’s discussion was more focused on the state of the national economy and progress since the recession. Carrick stated that the U.S. economy is the “only game in town” right now following the recent troubles with the Chinese, European and Japanese economies and the value of the U.S. dollar has risen as we are approaching self-reliance in oil and natural gas. Likewise, there has been job recovery with unemployment falling below 300,000 for a number of months.

One of Carrick’s most important points was his analysis of the industries driving economic recovery. Not surprisingly, tech companies like Apple and Google are growing the fastest. While this growth is good for the economy as a whole, the high-tech sector will probably not fuel as much growth in the construction industry.

Similarly to Simonson, Carrick believes that the construction industry is not as strong as it was before the recession. He also echoed the trend of younger people moving downtown into apartments and high rises away from the suburbs. Carrick argued that this shift will impact the construction market in the near future. However, there are positives: construction for the healthcare sector in particular grew throughout the recession and continues to rise.

The Take-Away
Although Baker, Simonson and Carrick each brought a unique perspective to the discussion, there were several points they agreed on. It was unanimous that the construction industry was stronger before the recession and that recovery is not yet complete. One of the factors driving slow recovery is the shortage of skilled labor and the need to rely on subcontractors to finish jobs.

Another trend that was noted by each economist was the shift from the suburbs to the city seen in younger generations. This trend may or may not be permanent, but it is worth studying because it will impact housing construction, especially the rise of multi-family housing.

Several sectors that the economists agreed promise growth are the “green” renewable energy sector, the commercial and retail sectors, and the healthcare and assisted living sectors. Healthcare construction is seen as especially promising with the coming retirement of the Baby Boomers over the next decade and the increasing need for assisted living facilities.

To wrap it up: the construction industry is still feeling the aftereffects of the recession and struggling with employment shortages, but there are new opportunities on the horizon.

If you would like to view the presentation for yourself, you can find it here: cmdgroup.com/webcasts. Feel free to leave any responses or insights in the comments section below!

If you would like more information about how our services can help you in your marketing, please contact us at 847-358-4848, or visit interlinegroup.com.