Fire in the Freezer! 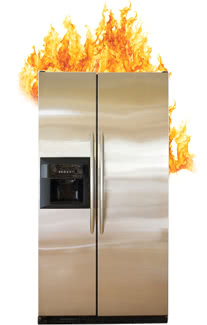 In 2009, the U.S. Consumer Product Safety Commission in conjunction with Maytag issued a voluntary recall on 1.6 million refrigerators due to a fire hazard. The recall included brands also made by Maytag: Jenn-Air, Amana, Admiral, Magic Chef, Performa by Maytag and Crosley. The recall was later expanded after an additional 23 reports of fires and four reports of property damage due to fire.

Careless cooking is still a leading cause of fires in the kitchen, but look out for kitchen fires unrelated to cooking equipment.

According to the National Fire Protection Association, refrigerators, freezers and ice makers started nearly 1,700 kitchen fires and resulted in five deaths and $47 million in direct property damage between 2005 and 2009. Dishwashers were the second biggest non-cooking equipment culprit: The association says dishwashers were the source of 1,140 home structure fires, causing about $24 million in damage per year.

Even the lowly electric can opener caused 20 reported fires.

As dire as those numbers sound, kitchen fires unrelated to stoves, ovens and other cooking equipment account for less than 1% of all home fires. Appliances tend to be more dangerous to our health for other reasons:  In 2010 alone, an estimated 48,920 injuries involving refrigerators, freezers or ice makers were reported to hospital emergency rooms. Most of those injuries were due to moving or falling appliances. Ouch!

How can we avoid kitchen fires from non-cooking equipment? The NFPA offers these tips:
• Have a professional install any major appliance.
• Make sure power cords are not pinched or crimped.
• Make sure appliances are connected to circuits with enough capacity.
• Make sure any equipment has adequate clearance from nearby fixed and portable combustibles.