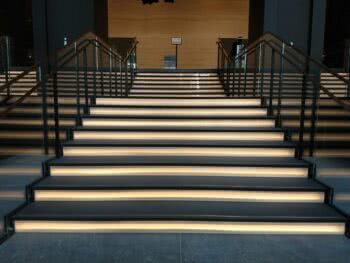 Several architectural glass products from Bendheim blend transparency and privacy in a major renovation at one of the world’s most iconic structures, Willis Tower, which held the mantle of the world’s tallest building for 25 years.

Bendheim’s Gothic™ and Houdini™ glass were among the architectural choices in the $500 million renovation. Formerly known as Sears Tower, the renovation covered 460,000 square feet and extended across five floors. Gensler led the project for real estate holders Blackstone and Equity Office.

Willis Tower, which held the mantle of the world’s tallest building for 25 years, is home to about 15,000 workers and hosts 1.7 million annual tourists. The Skydeck Chicago observatory at Willis Tower is a major tourist attraction for the city.[1]

Bendheim’s Houdini glass was used in a security area to help obfuscate security equipment. Gensler also specified translucent White and Grey colored glass in the project. A custom-made, double-sided bronze etch mirror from Bendheim was used to bring a sense of hospitality and a warmer backdrop to the lobby.

The overall design objective was to design a building that felt more welcoming for workers, tourists and the 170,000 people who work or live within a 5-minute radius of the building. Gensler, in a project profile on its website, said its “charge was to create a vibrant, world-class destination at a site that is not currently realizing its full potential.”

The renovation includes 300,000 square feet of new retail at the base of the tower as well as a new 30,000 square foot outdoor deck. The redesigned building also includes a subterranean area that allows visitors to look up 111 stories. New amenities include a fitness center, tenant lounges, and a private event space.

Willis Tower was completed in 1974. The 1,450-foot skyscraper is the third largest building in the Western Hemisphere, and stood as the world’s tallest building for nearly 25 years. One World Trade Center and Central Park Tower are the only buildings taller than Willis Tower in the United States.

Christopher Glass Services of Chicago served as the installer while Turner and Clayco were the general contractors.

Visiting the Willis Tower website, there’s this important information posted: Important Notice Regarding COVID-19. Willis Tower and Skydeck Chicago have implemented measures consistent with CDC and local and federal guidance to try to reduce the spread of COVID-19 on the premises, including enhanced cleaning protocols. Even with these procedures in place, PLEASE BE ADVISED that building occupants, building and Skydeck visitors, or others currently or previously present upon this property and/or the Skydeck MAY HAVE CONTRACTED OR BEEN EXPOSED TO COVID-19 or other infectious diseases, and may expose you. By accessing and using building common areas, the Skydeck, and their associated amenities, you and your party voluntarily assume all risks of your use—INCLUDING THE RISK OF EXPOSURE TO INFECTIOUS DISEASE—and you waive all claims, including claims for negligence, against Willis Tower, Skydeck Chicago, and their respective owners, managers, affiliates, agents and representatives, arising out of such use.  The above parties hereby disclaim all liability for any injuries arising out of your use of this property and the Skydeck, including exposure to infectious disease.

As the world struggles under COVID-19, it’s refreshing to see that beauty persists through the efforts of manufacturers like Bendheim and the architects and contractors who specify and install that beauty. Thank you!