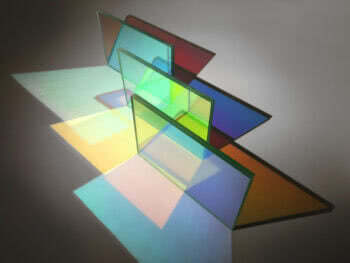 Bendheim’s dichroic glass is innately interactive in nature. As the viewer’s angle to the glass changes, so does its color, giving Optichroic its kinetic iridescent characteristics.

NASA developed dichroic glass in the late 1950s to protect against the potentially harmful effects of direct sunlight and cosmic radiation. With its striking visual qualities, dichroic glass has found use in a variety of architectural applications – from stair railings to wall cladding.

Bendheim introduced large-format Optichroic dichroic glass to the architectural market in the early 2000s, and the new colors are the first since the product launch.

Since its introduction to the market, Optichroic has gained appeal due to its space-age aesthetic and versatility. Bendheim can tailor the glass with a wide range of finishes, textures and light-diffusing interlayers, creating a myriad of effects. Adding a matte finish, for example, can soften the shifting hues and lend an ephemeral quality – what one client referred to as “color without color.” Adding a sharp texture has the opposite effect, intensifying the color.

The adaptability of Optichroic glass is reflected in the diversity of its applications. At the City University of New York Science Campus, for instance, Bendheim’s triple-laminated dichroic guardrails were custom curved to hug the contours of the six-story interior staircase. Their fine etched surfaces diffuse and soften the light and glass colors. They also resist fingerprints and stains – the perfect choice for this high-traffic area. At Google’s New York City office, clear dichroic glass exhibits high reflectivity and color. It was selected for its ability to capture and radiate the full spectrum of light.

The new dichroic colors from Bendheim build on the products’ design flexibility. The glass is available in sizes up to 54” x 120” and thicknesses up to 3/4 inches. From subtle “color sans color” partitions to vibrant feature walls, Optichroic glass allows architects to specify the colorway and intensity that works for their unique project.

About Bendheim
Bendheim is one of the world’s foremost resources for specialty architectural glass. Founded in New York City in 1927, the fourth-generation, family-owned company offers a virtually unlimited range of customizable glass solutions for interior and exterior building applications. Bendheim develops, fabricates, and distributes its products worldwide. The company maintains production facilities in New Jersey and a design lab in New York City. For additional information, please visit bendheim.com.