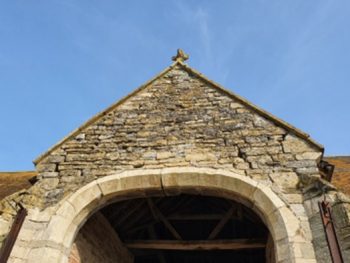 The development of agriculture and enlargement of St. Peters Abbeys possessions in the locality during the 13th century meant that the Manor required storage in Hartpury. The barn, now incorrectly called a tithe barn, was built during the 14th century to store all the produce from the manor, not merely the tithe.

Measuring 161ft x 36ft, Haripur’s tithe barn is one of the largest in Gloucestershire, and indeed, in the country. At one end of the roof, it has a winged dragon as a finial and at the other, a couchant lion. The English lion looks towards Wales and the Welsh dragon towards England. There are also finials over the two porches, one of which is broken, perhaps when the porch collapsed, as there is evidence of this having been rebuilt at some time.

The structural integrity of one of the main arches above one of the main entrances had been compromised by settlement and rotation of the left-hand return wall due to older alterations to the adjacent ground.

John Topp of structural engineers OBrien and Price, The Old Bakehouse, Monmouth Rd, Tintern, Monmouthshire, NP16 6SE, undertook a full structural survey and devised a solution using Cintec anchors to eliminate the problems caused by the movement of the wall.

The arch was ambitiously flat when originally built centuries ago and the movement of the wall at the springing destabilized the arch to the extent that hinges were formed at the quarter point and the apex. Temporary timber propping was in place to support the failing arch while the installation of anchors was carried out.

Falcon Structural Repairs Ltd of Bristol drilled and installed two Cintec anchors in excess of 5 metres in length through the failed arch stones using mining barrels which were 55mm in diameter.

About CINTEC
CINTEC North America is a world leader in the field of structural masonry retrofit strengthening, repair, and preservation. The principal activity of the company is the design and manufacture of the CINTEC Reinforcing and Anchoring Systems, a micro cement anchoring and reinforcing technique. CINTEC offers complete structural analysis and design services, turnkey solutions, as well as masonry repair and reinforcement anchors used for blast protection, seismic reinforcement, historic preservation and overall building strengthening. CINTEC has worked on projects around the world including the Egyptian Pyramids, Windsor Castle, Buckingham Palace, Statue of Liberty, the Library of Parliament in Canada and the White House complex.