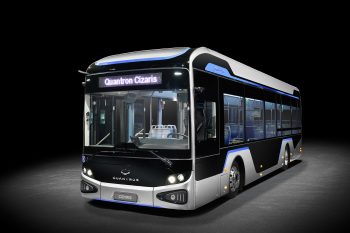 Combating Climate Change One ZEB at A Time 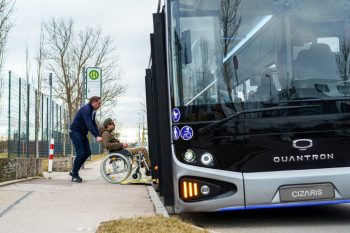 The CIZARIS represents the entry of electric vehicle pioneer QUANTRON into the sustainable and tender-driven city bus market, which has grown increasingly significant due to the European “Clean Vehicles Directive.” In doing so, the designers are drawing on a vehicle platform that has proven itself hundreds of times over in Asia’s largest electric bus markets in recent years.

The CIZARIS relies on a combination of reliable lithium iron phosphate batteries and a highly efficient synchronous central motor from Dana/TM4, which has been used in tens of thousands of buses for years. QUANTRON believes this combination, which has seen limited use in Europe, represents the optimal solution for converting the energy on board into propulsion as safely and efficiently as possible. With between 242 and 424 kWh of selectable battery capacity, the roof-mounted battery packs are fast-charged with 65 to 150 kW direct current (DC) in two to five hours. In the medium-heavy eSORT 2 cycle, this energy is sufficient for 220 to 370 kilometer (220 to 370 mile) circulations at a do-duty (DoD) charge rate of 10 percent.

Designed as a purely electric bus, the CIZARIS does not have a conventional power unit tower in the rear, which allows for an impressive 24 to 35 seats and, depending on the battery package, can accommodate 81 to 95 passengers, significantly more than many competitor’s models. A Valeo heat pump/air conditioning unit with a cooling capacity of 33 kW ensures proper climate control. Antiviral filters and an enclosed driver’s cab are available as options.

The driver cockpit includes a functionally-designed panel with a large rear-view camera monitor. A digital instrument cluster from Actia provides information on all important processes and status messages which can be read at all times. The electric bus also features the latest electronic safety systems (ABS/ASR, EBS 5.0, ECAS from European production) and can also be retrofitted with the turn-off assistant from Mobile-eye.

The vehicle-mounted and water-cooled central motor from Dana/TM4 based on the permanent synchronous principle (PSM) features low speeds and high efficiency compared with asynchronous motors. It has an output of 145/245 kW (nominal/maximum) and a maximum engine torque of 1,055/3,329 N·m, which is developed without any gear changes. With the introduction of the fuel cell version, an even more powerful powertrain will be used. Another advantage of the central engine, in addition to its largely silent operation, is that since it does not contribute to the unsprung masses of the chassis like an electric portal axle, it is not exposed to constant vibrations and thus has a longer service life than such systems.

QUANTRON works with customers to configure the vehicle and analyze its routes and electrical equipment as early as the purchasing process will allow. The basis for a long bus life is a complex cataphoretic dip painting of the frame (KTL) and other effective corrosion protection measures. The warranty terms are basically two years for the entire vehicle, and eight years or 3,000 charging cycles (or 80 percent charging capacity – whichever comes first) for the important batteries. In total, QUANTRON has a network of 700 service partners in Europe, many of whom can also service electric buses. In a multi-stage service concept, it is checked in each case whether the customer’s workshop can be upgraded to work largely self-sufficiently with the support of QUANTRON technicians.

For the market launch of the QUANTRON CIZARIS, the sales focus is initially on the markets of Eastern Europe, the Middle East, Scandinavia and Southern Europe. Due to the special requirements of the German market, such as the VDV specifications regarding the driver’s workstation and other systems, the market launch in Germany, Austria and Switzerland will take place in the second half of 2022.

About Quantron AG
A high-tech spin-off of the renowned Haller GmbH, Quantron AG is a system provider of clean battery and hydrogen-powered e-mobility for commercial vehicles such as trucks, buses and vans. In addition to new electric vehicles, the services offered includes the electrification of used and existing vehicles, the creation of individual overall concepts including the appropriate charging infrastructure as well as rental, financing and leasing offers and driver training. Quantron AG also sells batteries and integrated customized electrification concepts to manufacturers of commercial vehicles, machinery and intralogistics vehicles. A pioneer and innovation driver for e-mobility in passenger, transport and freight traffic, the company has a network of 700 service partners.