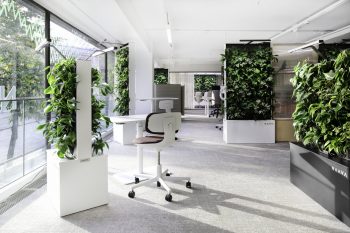 For many, the post-pandemic return to on-site work means daily confinement to sterile, overly air-conditioned, or poorly ventilated workspaces that are harmful to health.

Helsinki, Finland – A study by Finnish scientists shows that air-circulating indoor green walls can improve employees’ health. Conducted as part of the ADELE 2 (Immune Defence and Living Environment) project between Natural Resources Institute Finland (Luke) and two major Finnish universities, the study is the first of its kind linking exposure to living green walls with improved skin integrity and enhanced immunity against pathogens and allergens.

The study’s results, published in the journal Scientific Reports, are based on 28 office workers divided into two groups in urban office environments in the Finnish cities of Tampere and Lahti.

11 participants had their workspaces fitted with air-purifying green walls, while the 17 remaining participants formed a control group with no green wall exposure. After just 28 days, those working alongside air-circulating green walls experienced an increase in both the number and diversity of friendly bacteria on their skin, compared with workers in the control group. These beneficial bacteria help the skin fend off pathogens and inflammation. They also boost immune system responses, which indicates that being in spaces with green walls has a positive effect on health-supporting skin microbiota as well as the immune system.

The green walls for the study were provided by Naava, a Finnish company specialized in green walls that produce outdoor air for indoor environments.

“From an evolutionary and biological point of view, we are not meant to spend our lives inside concrete boxes – and that’s what most office spaces are like. Whether we humans know it or not, there’s an in-built need in us to be in the middle of nature. In Western societies – due to things like increased hygiene level and biodiversity loss – our natural exposure to environmental microbes has decreased. This is seen as one of the major reasons for the rise of autoimmune diseases and allergies,” says Aki Soudunsaari, a health-related serial entrepreneur and co-founder at Naava.

Study subjects in the test group were exposed to green walls only at the office during their workdays. Skin and blood samples were collected three times from both experimental and control group participants to monitor the impact of the green walls.

Providing healthier workspaces with good ventilation has been a priority for companies after the pandemic. However, excessive sanitization of spaces and surfaces can also have an adverse effect.

“Science has told us that children should be in daily contact with microbes via dirt and soil to boost their immune systems – and it’s no different for adults. Isolating ourselves completely from positive microbes will only harm our health and well-being. Sanitization serves an important function in disease prevention and employee safety, but most workspaces have gone overboard with sterilization via chemicals,” points out Soudunsaari who founded Naava after he fell ill due to poor indoor air quality.

Having grown up in Lapland, surrounded by some of the most pristine wilderness in the world, Soudunsaari hopes that more people recognize humanity as a species that needs exposure to nature.

“Our goal should be to flow in tandem with nature, not against it,” he concludes.

About Naava
Founded in 2011, Naava is an indoor nature technology company from the Nordics. We improve people’s physical and mental health by reconnecting them with nature. Combining air purifiers, humidifiers, and plant walls into one innovative product, we create solutions to enhance the connection between nature and human-friendly environments indoors. Employing more than 80 people, Naava operates in 16 countries and has more than 390,000 daily users. We are on a mission to restore respect for nature, and drive people and the planet towards healthier, sustainable urban living. Experience the power of nature – indoors. www.naava.io.