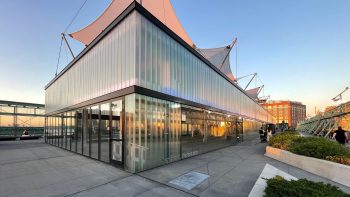 NEW YORK, NY – Designed by Handel Architects, the stunning $410 million restoration and revitalization of Pier 57 in Manhattan features walls of Bendheim channel glass to help blend old architectural elements with new and create 350,000 square feet of mixed-use space, with an additional 50,000 square feet on the ground floor for public amenities. With Google as the anchor tenant, Pier 57 will also offer a food hall curated by the James Beard Foundation, a public gathering place called the Living Room, and flexible meeting space for booking by community organizations.

The building’s rooftop park, nearly two acres in size and open to the public, is the largest of its kind in New York City. The venue will also provide outdoor screening space for the annual Tribeca Film Festival.

Positioned to reflect Hudson River sunsets, the building’s walls are made of 6,400 square feet of Bendheim channel glass in the company’s SF60 frame system, installed by David Shuldiner, Inc. The lower-level walls are primarily made of Clarissimo glass, a clear material that allows extensive river views from the ground floor lobby and restaurant areas. Second story office walls and other selected panels are also glass with Bendheim’s 504 Rough Cast texture. A translucent finish for the glass on this floor eliminates workspace glare while creating a glowing exterior. In addition, low-e coatings throughout minimize ultraviolet and infrared light while maximizing the transmission of visible wavelengths.

“As a new structure built on a historic building, we wanted the pavilion on the roof of the Pier to read as a light intervention, both in material selection and the language of design,” explained Jessica Levine, Senior Associate at Handel Architects. The channel glass achieves this balance, acting as a diffuser of light while complimenting the historic shipping pier with its industrial appearance.”

Bendheim co-owner Robert Jayson commented, “We are proud to participate in the ongoing revitalization of New York City, including this important development. Our channel glass allowed the architects to build walls that are both functional and beautiful, making the most of Pier 57’s spectacular setting on the Hudson.”

Listed on the National Register of Historic Places, Pier 57 was originally completed in 1954 as a project of the New York City Marine and Aviation Department. First used as a shipping terminal for the Grace Line steamship company, it was the largest dock ever built by the City of New York. In 1969, the pier became a parking garage for New York City Transit buses, then closed altogether in 2003. The Hudson River Park Trust, a public benefit corporation established in 1998, began efforts to redevelop the pier in 2008.

About Bendheim
Bendheim is one of the world’s foremost resources for specialty architectural glass. Founded in New York City in 1927, the fourth-generation, family-owned company offers a virtually unlimited range of customizable glass solutions for interior and exterior building applications. Bendheim develops, fabricates, and distributes its products worldwide. The company maintains production facilities in New Jersey and a design lab in New York City. For additional information, please visit Bendheim.com.