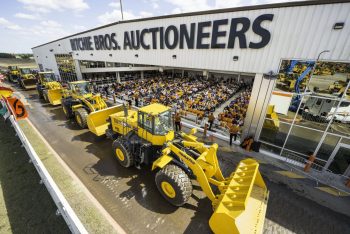 Orlando, FL – Amid a tight supply environment, Ritchie Bros. welcomed thousands of motivated buyers online and onsite to its premier global equipment event in Orlando. Buyers from around the world needing to fill immediate gaps in their fleets converged for the destination auction, creating strong pricing for equipment items and trucks. When the auction yard dust settled, Ritchie Bros. sold more than 11,200 items for US$213 million in the massive six-day event.

From the onset of the pandemic, Ritchie Bros. has invested to create an industry-leading buyer experience by leveraging the best of the onsite and online worlds. Orlando’s premier global auction this year was no different. Ritchie Bros. introduced a new online inspection tool that provided users with a 360-degree view of items selling, as well as an enhanced sale day experience with live videos and bidder maps. Bidders were also able to take advantage of a new mobile experience for online bidding.

“It was a thrill to bring people together in Orlando and see those important network connections in action,” says Ann Fandozzi, Chief Executive Officer, Ritchie Bros. “It was exciting to welcome everyone back with an amazing customer appreciation event to kick off the week. Customers from all over had an opportunity to interact with each other, re-establish long-standing Ritchie Bros. relationships and meet new members of our team. It showed once again that Orlando is more than an auction.

“We continue to work hard to evolve our sale-day experience, bringing together the best of both worlds – online and onsite – and it was great to hear so much positive feedback,” adds Ms. Fandozzi. “The technology we are providing continues to improve the buyer experience and we believe that contributed to the strong pricing we saw this week.”

“When you’re in the market to sell used equipment, you’re not going to find a better place to do it, or a better group of people, than Ritchie Bros.,” adds Daniel Vallencourt, Vice President of Vallencourt Construction. “At this year’s auction, we sold excavators, bulldozers, trucks, off-road trucks, attachments, and more. We’ve been doing business with Ritchie Bros. for 30 years, and they’re always up front with us, treat us right, no surprises, and we were glad to be back in Orlando.”

Orlando capped off a big February for Ritchie Bros. After starting its auction season in Tipton, Calif., Ritchie Bros. went on to conduct a US$59-million record-breaking Phoenix auction and a US$55-million Houston auction. In the coming weeks, Ritchie Bros. will sell more than 20,000 equipment items and trucks. The company also has weekly featured online auctions at IronPlanet.com; a daily reserved option with Marketplace-E; and a brand-new equipment listing service called Ritchie List, with more than 40,000+ items already listed.