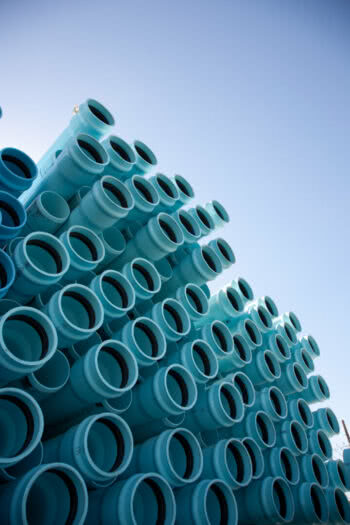 A new survey, conducted by Accountability Information Management, Inc. (AIM), a marketing research company specializing in business-to-business sales channels, showed that PVC piping is a preferred material for water infrastructure pipe projects. The survey, which was based on feedback from engineers, contractors, and municipal employees throughout the country involved in water projects, was commissioned by the Vinyl Institute (VI), the U.S. trade association representing manufacturers of vinyl, vinyl chloride monomer (VCM), additives, and modifiers.

“According to ASCE (the American Society of Civil Engineers), there is a water main break every two minutes and an estimated 6 billion gallons of treated water lost each day in the U.S.,” says Jim Nowakowski, AIM’s president. “Combine that with what’s going on in wastewater, and you have some addressable issues for piping. We know the critical component that influences the well-being of any community is its system for removing and treating wastewater for the protection of human and environmental health, this survey made a lot of sense in order to find out about the materials that are going to be used to bring those grades up.”

The AIM survey brought in 239 individuals from across the U.S. in spring 2021 with the objective of learning more about the market’s satisfaction with PVC pipe and gain a better understanding of specification involvement by audiences on pipe material in water infrastructure projects.

Questions about various piping materials, including PVC, cast iron, asbestos cement, concrete steel cylinder, galvanized steel, ductile iron, and other plastics in their use of potable water, wastewater, agricultural, and drain, waste, or vent applications were explored in the comprehensive research. Respondents were not aware that the Vinyl Institute was conducting this research, bringing objectivity and validity to the findings.

“We’re extremely pleased to have heard that PVC is a material of choice in many piping applications,” says Ned Monroe, VI President and CEO. “PVC pipe offers unsurpassed reliability and durability, and it continued to play a critical role in clean water delivery. We’re glad to see that those who specify and purchase piping materials are recognizing the benefits that PVC offers.”

Some of the key research findings included:

According to one of the hundreds of verbatim comments made “In my 45 years in consulting, I have come around from clay, cast iron, and copper to specifying PVC for most projects. If the correct pipe is specified in terms of strength and proper joints, and installed correctly, PVC is the better alternative.”

“What was insightful was the participants’ high level of satisfaction with the many characteristics of PVC pipes,” Nowakowski explains. “AIM used a scale of one to 10, with 10 being completely satisfied. When we saw characteristics of PVC such as pipe corrosivity pulling an 8.8 or the ease of installation 8.7 or the overall satisfaction of PVC 8.4, it told us something about this material. It works. “

“Nationwide, the drinking water and wastewater pipes underground are on average 45 years old according to the ASCE’s Wastewater Report Card,” Nowakowski adds. “Some systems have components more than a century old. Replacing them with an easy to install, easy to maintain material like PVC makes it much easier, especially when the professionals doing the work tell us that’s why they use it. Besides, PVC has a service life of 100 years, and that’s good news for infrastructure everywhere, isn’t it?”

About the Vinyl Institute.
The Vinyl Institute (VI), founded in 1982, is a U.S. trade association representing the leading manufacturers of vinyl, vinyl chloride monomer, vinyl additives, and modifiers. The VI works on behalf of its members to promote the benefits of the world’s most versatile plastic, used to make everything from PVC piping to flooring, roofing and vinyl siding. The vinyl industry in the United States employs over 350,000 highly skilled employees at nearly 3,000 facilities and generates an economic value of $54 billion. For more information, visit vinylinfo.org.

About Accountability Information Management.
Accountability Information Management, Inc. (AIM) is a marketing research company with a special emphasis on business-to-business sales channels. Their multi-disciplinary team has the expertise to evaluate and advise on market conditions and movements. AIM helps companies ACCESS, UNDERSTAND and UTILIZE information to meet marketing and business objectives. Serving as an extension to product planning and marketing teams so that focus remains on managing business, AIM helps companies improve efficiency, growth and profit through accurate data gathering. Through analysis and insightful recommendations, we uncover key market intelligence, assisting companies on how and where to best position their products and services.