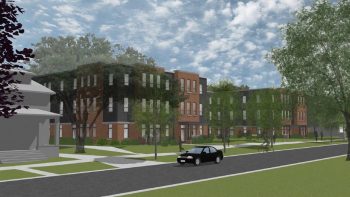 Grand Rapids, Mich. –Union Suites LLC in partnership with the Dwelling Place is one step closer to bringing fifty-two new housing units to the city of Grand Rapids. Orion Construction broke ground for the $12.2 million Union Suites on Coit apartments, which are being built at 608-626 Coit Avenue NE.

During the ground-breaking ceremony on Tuesday, July 19, Grand Rapids Mayor Rosalynn Bliss said that the addition of Union Suites on Coit is crucial for the city. Recent studies estimate a need for 5,340 rental units by 2025.

“I applaud this project that has been brought together by Union Suites LLC, Dwelling Place, and Orion Construction,” said Bliss. “City Leaders and I have been working tirelessly to address the need for all housing in our city, but there is a specific need in our community for safe affordable housing, like we are going to have here with Union Suites on Coit.”

The 46,000-square-foot building, which will have a mix of one, two, and three-bedroom apartments, is projected to be completed in August of 2023.

“For over 20 years, Orion Construction has been working on affordable housing developments in Michigan,” said Brad Walsh, president, Orion Construction. “We recognize the need for the addition to the housing stock in Grand Rapids. We are proud to be part of the solution by working with partners like Union Suites Development LLC, Dwelling Place, and Lott3Metz to bring affordable housing to our community.”

Rental rates will be determined by household income and will be restricted to individuals and families earning 30-80 percent of Kent County’s Area Median Income.

“Everyone deserves to have a place to live that is both safe and affordable,” said Chris Bennett, director of housing and community development, Dwelling Place. “The new homes in the Belknap neighborhood allow individuals to attain personal growth and flourish, while at the same time allowing for an area of the city that is growing to become home for working families.”

Union Suites LLC worked with the Michigan State Housing Development Authority to identify projects within the city of Grand Rapids in areas that are experiencing increased rent rates.

“It is important for us to bring affordable housing in areas of the city where there is the greatest need,” said Nick Lovelace, partner, Union Suites LLC. “The Belknap Lookout Neighborhood is very close to the city’s ‘Medical Mile,’ which employs thousands of individuals.”

Grand Rapids-based Lott3Metz Architecture has provided the design and engineering for Union Suites on Coit; and KMG Prestige, Inc. will manage the property once completed.

About Orion Construction Inc.
Orion is a multi-service construction company and development firm in West Michigan with a mission of revitalizing urban cores and local economies through high-quality new construction, renovation, restoration, and design/build services. The firm specializes in mixed-use development, industrial, institutional, retail and multi-family construction. Orion is widely recognized throughout Michigan as a leader in developing successful public/private partnerships and working with neighborhoods and local governments to achieve mutually beneficial and economically sustainable projects. Visit https://www.orionbuilt.com/.