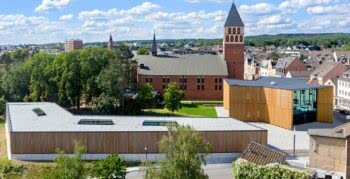 The catholic parish community center “Hippolytushaus” is a prominent urban-planning highlight at the entrance to the town of Troisdorf, near Bonn. It is part of an ensemble of buildings that is located in the archdiocese of Cologne and includes the historic St. Hippolytus church and the „Hippolytusgarten“ family centre, which is a kindergarten. Both new buildings are the work of Stuttgart architects ATELIER BRÜCKNER.

The parish community center is designed as a city gate that emanates its character radially, in that it is a building with three fronts. Large “gates”, which are fully glazed all over, constitute an inviting, space-enclosing gesture, which is concentrated in the center of the two-story flat-roofed building. On the ground, an isosceles triangle presents itself. On the top floor, a circular skylight emphasizes the centreing effect.

“The position of the property was a challenge – particularly for a kindergarten“, said Jannis Renner, project manager at ATELIER BRÜCKNER. A busy federal highway and a railway track are directly adjacent. “For us, it was clear that we wanted to give the children a place that was protected. We therefore formulated the southern outer wall as a means of acoustic and visual protection” said Renner. “A facade covered in wooden slats ensures the necessary privacy, while creating an atmosphere of safety and ease.” 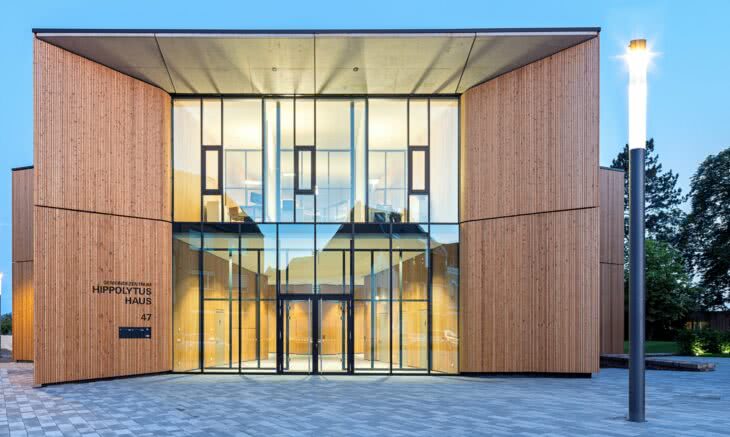 The building plays with the contrast between flowing, generously opening space and closed wall surfaces, whereby the layout is defined by three uniform wings of the building. They flank the spacious, light-filled area inside the building and accommodate the ancillary rooms of the city gate. The effect of the building’s wings, which are covered with wooden slats, is that of homogeneously closed units whose austere exteriors are made to look dynamic by means of a concave curve.

On the fronts of the building, the outer walls and the projecting fair-faced concrete ceiling of the flat-roofed building point the way into the building. Here, the wall covering is continued without interruption. Narrow, room-high beechwood panels characterize the indoor spaces and generate their particular atmosphere, whereas ancillary rooms and fixtures are kept decently white. The anthracite-grey colouring of the floor relates to the stone surfacing of the outdoor area so that the surrounding, newly designed square seems to flow, as it were, through the building.

The approximately 1200 square meter parish community centre is a publicly accessible center of attraction, suitable for a wide variety of uses: the large “gates” enable access to a foyer area entered through a vestibule and to two separable halls for cultural events relating to pastoral work and for the Tafel (food bank) café. The ancillary rooms accommodate the stairwell, storage spaces and sanitary facilities. In addition, there is a spacious kitchen and the counselling centre of Lotsenpunkt e.V.

On the top floor, there are ten workstations of the Troisdorf parish community as well as quiet offices for meetings and a light-filled assembly room. It opens up in a westerly direction and offers a view of the newly created public green space between the kindergarten and the church building.

Engaging in a dialogue with the city, the three-part ensemble of buildings is able to hold its own as a strong composite unit in the heterogeneous surroundings. The community center acts as a city gate and becomes an urban meeting point for the entire town community.

Due to the current corona restrictions, it will not be possible for the architects to officially hand over the keys to the parish community until the beginning of September. Even before this, however, staff will move into the pastoral offices. The Hippolytusgarten family center was opened in autumn 2019.