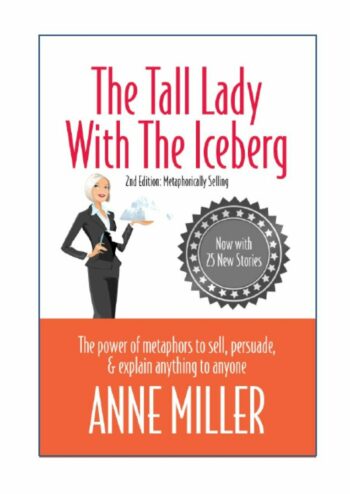 Designers are naturally visual people. But so are most of us. When visuals start to blur (try looking at ten kitchens or ten bathrooms), how do you separate your designs from others’? How do you convey to your clients and prospects what really makes you different?

In other words, how do you “pitch” your clients if everyone is showing them beautiful designs?

When you read The Tall Lady with the Iceberg: The power of metaphors to sell, persuade, and explain anything to anyone by Anne Miller, something will happen to you… something that will infuse your sales pitches with energy, the energy found only in metaphors and stories that come from deep, human experiences. Because as much as your visuals are “exciting,” so are your competitor’s. It is only through words AROUND your visuals that you can differentiate, and Miller’s Metaphors shows you how.

It’s not just that Miller uses her 25-year successful career in sales and presentation skills seminars, speaking, and consulting to show you how. It’s that Miller is a natural teacher who has written THE handbook on using metaphors to make your points in business pitches.

Frankly, this book will make anyone who reads and practices its methods a better presenter. The book provokes thought, challenges the status quo and in the end, is actually a blueprint for pitching your business using the richness of language.

In her last chapter – My Metaphor Vault – Miller tells us that “the clipping file can be a godsend. Looking through it, you’ll find just the quotation, or story, or image you need, or you’ll feed your right brain enough fuel to kick … into high gear to come up with a fresh metaphor.” Every designer I’ve ever met has a clipping file of images where they put designs they can refer to in the future. This book will be the first piece you put in your new file about the words you should use for those images.

When we hear the word “metaphor,” we may run in the opposite direction because that word may bring back memories of English Grammar lessons.

Do not make that mistake with this book.

Miller has an “easy-to-read” quality that’s focused on helping you to gain business through the use of language – specifically, the metaphor. Before you realize it, you will start bringing in your own experiences from your background, bumping them up against Miller’s own discussions. The result will be an amazing experience. Even if you’ve never given a presentation, you will want to give them when you finish Miller’s book.

We’ve all used metaphors in our lives, but most of us haven’t consciously thought about them. What Miller does is make us think about them in a new, exciting way. She shows us why and how they can be so effective in communicating our ideas in the world of business. Especially today, when the noise is overwhelming, there are plenty of examples in her book that show you how to “cut through the clutter” (pardon my metaphor).

Her definition of the metaphor –“a way of communicating. It’s a shortcut to instant understanding.”–  is a lot better than what any dictionary will tell you.  Because a metaphor is actually a rich, powerful language, words that jolt the listener into gaining an awareness of what you are saying suddenly, intentionally.

The result is understanding – and appreciation – for what you are saying (and by default, what you are showing them in your designs). And that makes all the difference in making a sale.

Miller’s book is divided into four sections of 24 chapters, each section building like a crescendo toward what is the hidden jewel of this book: the 40-page Appendix. Most people ignore an Appendix in a book. Don’t ignore this one.

Because after you absorb her chapters, it’s in this Appendix where you will find rich stories that you will not only enjoy, but you will use to stimulate your own stories from your own personal experiences. Miller continually encourages her readers throughout the book – “you can do this” – making it easy to not only enjoy the stories, but to pause and think of your own.

She admits that throughout her book she used “metaphor” very broadly (i.e., analogies, stories, anecdotes, etc.). But that’s because all of them are actually part of the metaphor family. Miller admits:

“The good news is you can learn how to use metaphors to move your listener from a position of staunch resistance to eager complicity. Getting your client to yes is much easier with metaphors and much easier to do than you may think. This book will show you how.”

Don Tickle, one of the best salesmen I’ve ever worked with in my life, once said: “You don’t learn anything by talking, Jim.” He was, of course, advocating for listening, the single most essential skill of any salesperson.

So you should listen to Miller as she tells you:

“People tend to make two mistakes. The first is that, rather than choose their words carefully, they inundate their listener with everything they know — often speaking more from their point of view rather than from their client’s vantage point and doing it far too casually. They put their buyers to sleep.”

This is the “keep talking and something will stick” philosophy, which never works in today’s world drowning in content, and leads to Miller’s second point of why her clients fail: “Too much other information competes for their listeners’ attention.”

We’ve all experienced this condition, either when we’re presenting or being presented to. Glazing eyes, drifting off into our own personal worlds. Metaphor breaks this pattern and jolts the reader into attentiveness.

It’s Not About You. It’s About Them.

You have to have shared experiences with an audience in order to communicate. The metaphor is the road you take to do the sharing. Miller’s book teaches us selling is not about you…it’s about them.

For example, we had an intern in our company a few years ago who was in her third year of college. I have a poster in my office that I use as a kind of Rorschach Test. I ask people to describe the scene, talk about it. It’s a way to evaluate creativity, thinking, etc. And it’s fun. The poster has two gentlemen – one older, one younger — in tuxedos smiling, holding Cutty’s. It was an advertisement for booze. The younger man looks a lot like Robert Redford. Inevitably, when we would discuss the poster, a candidate will say, “The younger one looks like Robert Redford.” But, this year was different. My intern didn’t say anything about the younger man. After I waited what I thought was long enough, I asked, “Does that young one look like Robert Redford?” She looked at me and said with complete sincerity, “Who is Robert Redford?” I wrote a post about this: Rorschach Test: Who Is Robert Redford? which several of my clients commented on with similar experiences.

Use It or Lose It

One of the benefits about Miller’s book that makes it completely worthwhile is that she gives the reader exercises at the end of each chapter. These practice sessions will enable the reader to develop metaphorical skills needed to “think on your feet.”

There are many examples where the spontaneous answer you give will be the turning point of your presentation. Therefore, it is important to practice and really fill your mind with the richness of metaphors every day. Her quote from Mark Twain says it perhaps the best: “The difference between the right word and the almost right word is the difference between lightning and a lightning bug.”

Miller’s left brain/right brain discussion is terrific as well: she calls the right brain Robin (after Robin Williams) and the left brain Joe (after Joe Friday from Dragnet). Miller argues with purpose in telling us, “the dirty little secret about the human brain is that, despite its phenomenal evolution from little more than an olfactory knob, it’s still wired to respond more to the emotional than to the cognitive, more to the visual than to the verbal.” Her exercises work out both sides of your brain.

I learned many years ago when I became a copywriter there is a world of difference between telling and showing. Metaphors show. They weave in and out the fabric of a pitch through “visual language.”

We all know business is tough. You can say, “business is tough.” So will a hundred other people. But if you say, “It’s like quicksand out there” you not only stand out, you become memorable. My client said that to me years and years ago. Every time business becomes tough I think of quicksand, and him.

I think the best part about Miller’s book is her ability to gently challenge your thinking.

For example, when she writes, “Imagine trying to sell a Porsche, a diamond, or a vacation destination without pictures.” I’ve always believed visuals are important, but words are more important – the right words.

Miller’s book made me rethink this position and come to the same conclusion: know your audience. And practice…prepare…or as she says, never forget that the “the brain ‘sees’ only what it has experienced in some way” and that “Your brain is in fact more like a scrapbook than it is a computer.”

One of the metaphors in my bag is the movie Predator. When Arnold puts mud on himself, the alien can’t see him. A lot of times, there is mud on your presentations.

Metaphors Wash the Mud Away.

In his book, The Art of the Sale, Philip Delves Broughton wrote: “Many supposedly well-educated people in the business world are clueless about one of its most vital functions, the means by which you actually generate revenue.” He proceeded to write his book collecting stories from the sales masters throughout the world he interviewed, because as he put it, “selling is both the most primitive and the most evolved aspect of economic life. It is ignored by business academics and is fought with moral risk.”

It is a remarkable book., and if you had to pick a companion book to Broughton’s, it would be Anne Miller’s The Tall Lady with the Iceberg. Whereas Broughton brings you the very rich stories of master sales people, Miller brings you the ABCs of selling through what every successful salesperson uses: stories and metaphors.

And she does that with grace, professionalism, and honesty not readily found these days. 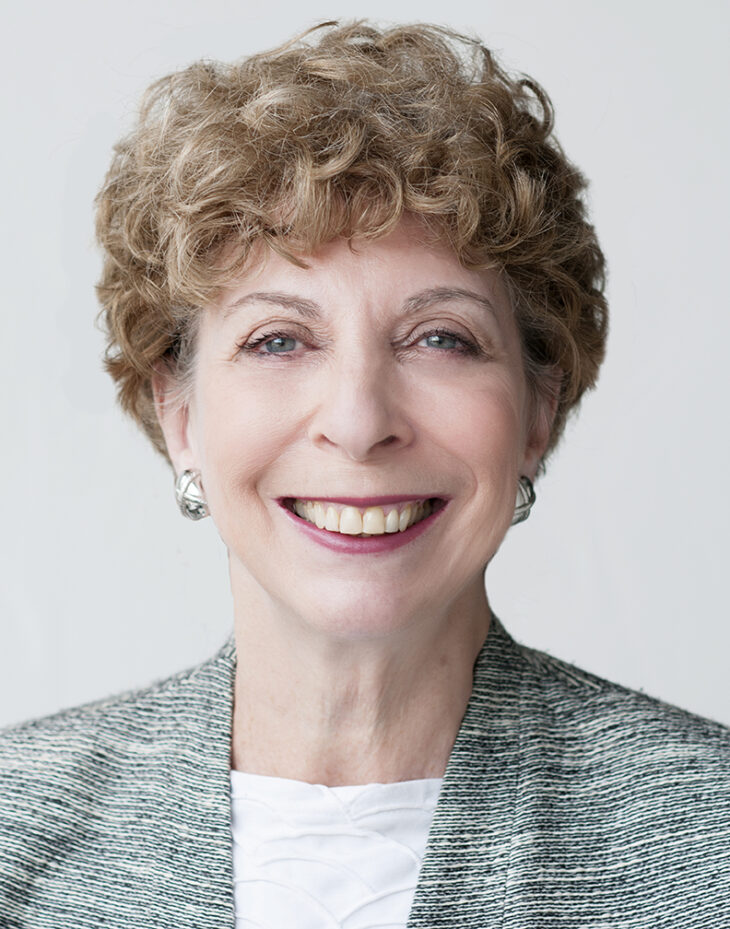 About Anne Miller. Anne is founder of Chiron Associates, Inc. For the last twentyfive years, she has specialized in sales and presentation skills seminars, speaking, and consulting for high profile associations and Fortune 1000 companies, both in the United States and around the world. She has appeared on Bloomberg News Radio and CNNfn and has been featured in numerous online and offline publications and as a guest lecturer at Columbia Business School. She is the author of “Make What You Say Pay!” “365 Sales Tips for Winning Business,” and “Presentation Jazz!” Anne holds her MA from The University of Wisconsin and resides in New York City.

We asked Jim Nowakowski to review Anne Miller’s book. As we emerge from another year of severe disruption, it is more important than ever to keep pitching. A seasonsed professional trainer, designers and architects will find Jim’s review a prelude to the richness of language that will help you win business! Best of luck for the coming year! — the editors.